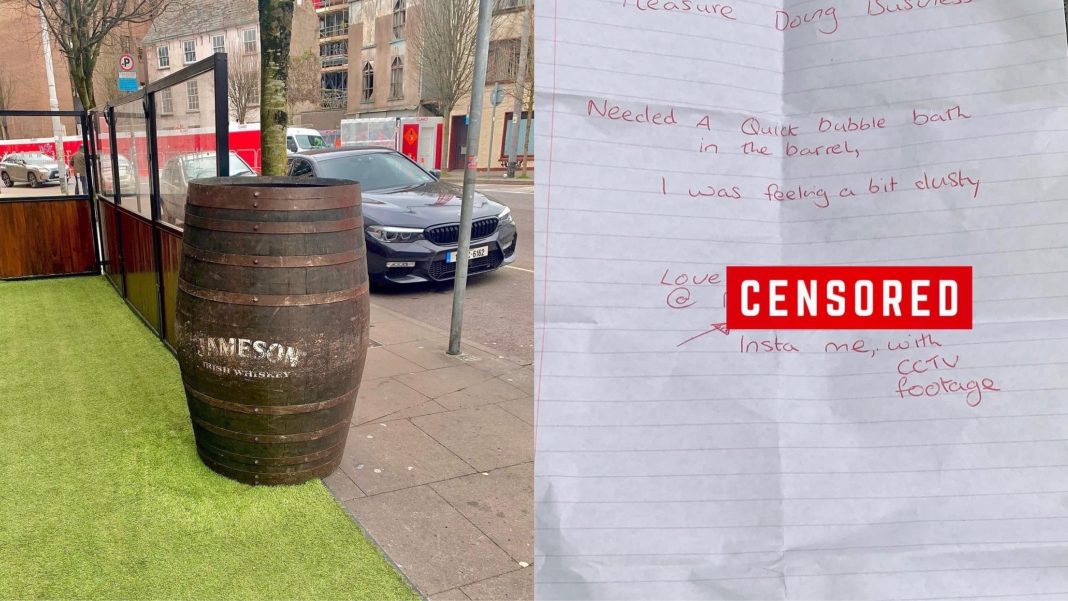 And they even left a saucy note.

In case you hadn’t already heard, a group of lads stole one of the historic Jameson barrels from outside the Mardyke on St Patrick’s Day.

Taking to social media to make the announcement yesterday, the Mardyke mentioned that the historic barrels are part of the buildings history, and they have CCTC footage of the culprits.

“3 culprits can be seen on CCTV rolling the barrel away from the building down Sheares Street in the direction of Dyke Parade at approx 2.20am on 17th March. We’re giving these 3 lads the chance to roll that barrel right back to where it belongs in the next 24 hours and there’ll be no more said about it.”

“In the event that we don’t find our barrel back where it belongs then we will be forced to release the CCTV online in an effort to get some further information on their identities (with a reward for any useful information provided of course!)

The ball (or should we say the barrel!) is in your court lads!”

The post seemed to have did the trick, however, because later that night, the gang returned with the barrel, placing it back where it belongs, and even left a cheeky note for the Mardyke.

In response to this, the Mardyke posted a video of the CCTV footage of its return, along with a picture of the note.

(Swipe below for the video)

Looks like the lads had the bejesus scared out of them!