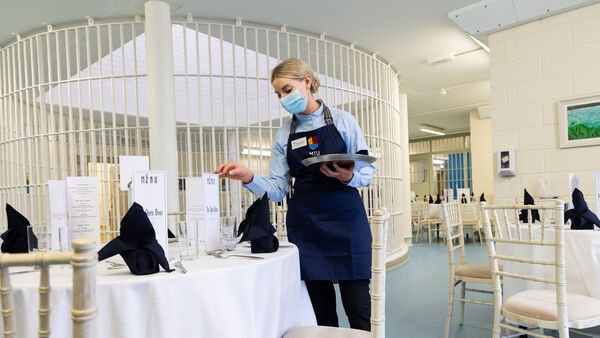 Cork Prison hosted a pop-up restaurant earlier this week for over 50 guests, the first event of its kind for the Irish Prison Service.

The pop-up restaurant, called ‘The Open Door’ was staffed by six Cork inmates who ranged in age from late teens to early 30’s. These inmates undertook an intensive eight-week cheffing course taught by experienced chef and lecturer at Munster Technological University (MTU), JJ Healy, and received their certifications on-site earlier this week.

A four-course meal was prepared for a total of 56 guests, which included 22 hoteliers and restauranteurs and took place in the prison’s education unit and on B3 landing. All six inmates work in the prisons kitchen, serving three meals a day to 260 inmates.

The event was organised by Irish Prison Service in association with MTU’s Department of Tourism and Hospitality, the Irish Association for Social Inclusion Opportunities (IASIO), which helps find accommodation and work for newly released prisoners, and Cork Education and Training Board (CETB).

The six inmates selected for the course were described as model prisoners and aims to prepare them for work in a professional restaurant once they’re released. Talking about the course, governor of Cork Prison, Peter O’Brien mentions:

“And if you leave prison a better person than what you came into it, and if you go back out and don’t commit a crime, then we are reducing the amount of victims.”